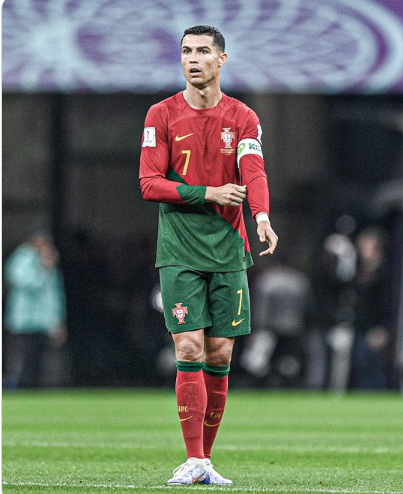 Was it Ronaldo’s goal or Bruno?

World Cup 2022: Cristiano Ronaldo becomes irate as FIFA verifies that he did not touch the ball in Bruno Fernandes’ goal against Uruguay.

At the Qatar 2022 World Cup, Portugal defeated Uruguay 2-0, and Cristiano Ronaldo thought he had scored, but Bruno Fernandes was given credit for the goal.

When he leapt to try to head in Fernandes’ cross in the 54th minute, Ronaldo originally seemed to have equaled Eusebio, Portugal’s all-time leading World Cup scorer with nine goals.

Replays indicate that the 37-year-old did not get a touch on the goal, which was ultimately given to his former teammate Fernandes of Manchester United.

The world’s top soccer governing organization, FIFA, verified to ESPN that Cristiano Ronaldo did not touch the ball on Bruno Fernandes’ cross. This conclusion was supported by the technology in use at the time.

“We can conclusively verify that there is no touch with Cristiano Ronaldo’s ball for the opening goal in the encounter between Portugal and Uruguay using the ‘Connected Ball’ technology housed in the official Adidas match ball,” FIFA said in a statement.

“No external force could be observed on the ball, as shown by the lack of ‘beats’ in the readings,” the announcement stated. The ball’s 500 Hz IMU sensor, the body explained, “allows us to be highly exact in our analyses.”

At the World Cup, what comes next for Portugal?

The good news for CR7 and Portugal is that with the aforementioned victory against Uruguay, they were able to guarantee their position in the round of 16 and will likely avoid seeing Brazil, since both teams were the top dogs in Groups G and H. They will play South Korea to complete their participation in the opening round with that assurance.